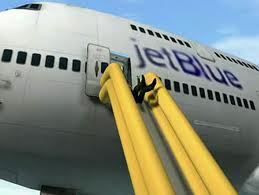 It doesn’t make sense to get mad at any particular airline anymore.   To declare ‘I’ll never fly that **!!ing airline again” is counterproductive since the alternative is likely  an airline with higher fares and zero service differentiation.   Sure there are U.S. domestic airlines like Virgin America that offer a higher quality of service – at slightly higher prices of course, but Virgin America does not fly everywhere I or anyone else will need to visit.

Jet Blue used to have cache as a ‘different’ airline with a unique offering and service.   I think many would agree that today more than fifteen years after the founding of Jet Blue in 1998 it’s merely just another airline.

Our daughter came home from Florida State University (yes the reigning NCAA FBS champs) for the holidays.  On the trip to New York City, she drove 2 ½ hours from Tallahasee to Jacksonville to catch a direct flight to JFK on a rainy Monday and everything worked like clockwork.   Good experience.  Her return trip was quite another matter.

Sunday January 5th was a bad, bad weather day for much of the United States.  This was mostly before the ‘polar vortex’ hit the U.S. East Coast.  Ice, sleet and freezing rain were falling over much of the East Coast.   Our daughter’s flight was scheduled to depart at 2:30 and she had to be back in Florida for classes on Monday (and to watch the game with her friends).   Her flight was delayed a half-hour, then three hours, then 8 hours before finally being canceled altogether.   The next flight Jet Blue could put her on was Wednesday the 8th.  There were many people that shared her plight.

The thing that aggravates me the most about the whole experience is that this kind of behavior from airlines is expected by travelers.  Remember when Jet Blue started?  Leather seats, Direct TV, cool snacks, cheeky flight attendant announcements?   Jet Blue was one of the first airlines to hire individuals to answer customer service calls on behalf of the company in their own homes.   It was all a novel approach to the airline business, the planes were clean and new and the public loved it.   The brand value skyrocketed.   And then the brand matured, not like fine wine but more like wine turning to vinegar.

Why does it have to be this way with airlines?   We all know it’s a difficult and ruthless business.   Fare matching, load factors, jet fuel costs all conspire to make running an airline extremely difficult.   Yet the absence of even a basic level of consistent service is the norm and airline customers mostly have no other recourse but to accept the status quo.  Jet Blue once tried to rise above that status but could not sustain its own brand promise.

What ended up happening to our daughter?  She flew on a different airline U.S. Airways (American – one of the airlines I have been mad at over the years), and got stranded in Washington on Monday when her connecting flight was canceled.    Then in a fortuitous confluence of attention and tears she worked her way on to a flight direct  to Tallahasee that arrived three hours before the National Championship game started.   She missed her classes that day but got to experience what will be a most memorable life event.

Weather delays and cancellations when it comes to air travel are to be expected.  But informing a paying passenger whose flight was canceled that they have to wait three days for an open flight with no restitution since it was ‘weather-related’ is just an awful and embarrassing policy.

Where are the upstarts beyond Virgin America?   We should expect and demand better.

4 Responses to Remember when Jet Blue wasn’t just another airline?