For Billboard advertising you have 7 seconds or less 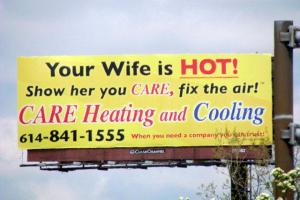 Since as my partner David likes to say we need to be COG-nostic (not agnostic) when it comes to deciding on the appropriate channel marketing mix OOH (out-of-home) marketing is always considered. As I have written in the past the multitude of options available in the OOH market today make what was a sleepy business much more interesting and even at times compelling.

But the use of OOH has to come with a caveat and the one we like to generalize is that as a marketer using most OOH options you really have seven seconds or less to make an impression. This obviously does not include advertising in bathrooms, which as location is indeed OOH even though the seven-second rule would not apply there, or in train, subway, bus and other public and private transportation environments where the audience is typically sitting or waiting for long periods of time.

Take billboards for example. Even with the increased deployment of digital billboards, people in their cars or trucks driving at 70 MPH do not have time to process some complex message. And trying to introduce a brand via billboards will be extremely challenging at best.

Established brands such as Coke, Pepsi, and Geico are three examples of companies that use outdoor advertising to promote their brands with simple messaging. After all you know what they are and simply the ads are designed to keep those brands near top of mind. Putting a phone number on a billboard may seem like a good idea but you are asking a lot of a driver or viewer when it comes to remembering the number. It’s not that it can never ‘work’ but using OOH as response-based marketing is probably not a good idea.

As I mentioned there are so many different types of OOH advertising. In ballparks and arenas, schools and universities, even pro sports teams are deploying logos and brands on uniforms increasingly. The NBA just cut a deal to have advertising on player uniforms starting in the 2017-18 season. Will it be long before the entire sports world will have advertiser logos like the NASCAR drivers have had for a long time? Not to mention soccer which has done so for years. Those brand impressions do have value and do not fall under the seven seconds or less rule.

But most OOH advertising remains billboards of varying types with transient populations passing by – most of the time without paying much attention. The level of precise targeting in OOH also continues to increase such that you can buy outdoor units in desired specific locations – as long as there is availability since some OOH advertisers close out competitors by purchasing units for extended periods.

I think there’s a place for OOH advertising especially for established products and services. One of my favorite billboards I saw this past winter in Florida had the headline: “Your wife is hot” with the ‘surprise’ being that it was promoting an air-conditioning company. Of course I cannot remember the name and phone number even though I’ve seen the ad a good number of times, but then again I do not live in Florida.

Seven seconds or less for billboards. Better yet – seven words or less too!