Mobile voice apps are already better than you think 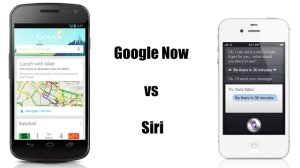 During this year’s Super Bowl, Amazon.com promoted the Amazon Echo, their new stand-alone voice activation device. Alec Baldwin is featured in the somewhat offbeat spots that can be seen here.

‘Alexa’, the name used to access whatever you want on the Amazon Echo, is in the room with you listening for you to say – “Alexa, how long will it take me to…” and it can answer other questions as well and buy things for you – on Amazon of course.   I’ve not yet purchased an Amazon Echo (about $150) but am thinking about it. A review on CNET did nothing but make me more interested.

And yet I hesitate. Why? The main reason is Google Now. As an Android mobile phone and tablet user, (yes I have an iPad and work on a Mac regularly but I need to know BOTH environments in terms of user experience and functionality), I am more and more impressed at how good and useful Google Now is. And dare I say, it’s better than Siri. Other reviews seem to concur.

I’ve not yet used Cortana (Microsoft’s voice response assistant) and with Google Now it’s unlikely I will anytime soon. Using Google Now (or Siri, Alexa, or Cortana) is an iterative process. The functionality improves all the time over time. I have found Google Now to be remarkably accurate in handling my voice queries on any number of varied requests. Often the answers are spoken by Google Now and the response is immediate and accurate.

Anyone that reads this blog with any regularity knows that I am a big fan of Jeff Bezos and Amazon. But I have this feeling of a too-contained environment if I were to adopt and use Amazon Echo regularly. Wouldn’t it make sense for Amazon to present choices that can be purchased on Amazon over those that cannot? It’s difficult for me to imagine that Amazon would be unbiased in its presentation of buying choices. And isn’t it a bit creepy that Alexa is listening all the time? Sure you can turn off that feature but in the case of Alexa that kind of defeats the purpose it would seem.

Chances are that I will eventually succumb and pick up an Amazon Echo. And probably love it too. Another one bites the dust.

How about you? Do you use and like or dislike voice activated assistants?