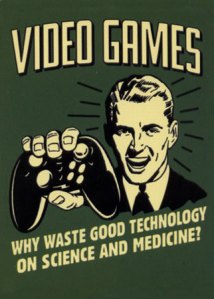 I have two grown children – a son who will be 24 next month and a daughter that will be 20 this summer.   Their digital skills as digital natives exceed mine despite my great efforts to keep up with the dizzying platforms and pace of platform expansion.    I find it amusing that my daughter Haley feels that parents do not use Facebook ‘properly’ (whatever that means) and we parents are in general somewhat of an amusement to she and her friends.

My son Gordon is a different story having been exposed to computers from the age of 4 years old by my late mother who herself was an early adopter of computers and was one of the first ‘Power sellers’ on eBay back in the 1990’s.    Gordon saw my mother playing a game called Mickey 123 and Jazz Jackrabbit and his life has not been the same since.   Today Gordon, like so many men and women (boys and girls for that matter) is a fairly dedicated online gamer.   He works at his job, sees a few friends but spends a good deal of time engaging in online games with other friends complete with headset, real-time conversations with people from all over the world and the (as far as it seems to me) constant evaporation of countless hours spent participating in different online games.

Back in my 20’s my roommates and I had a non-online gaming system called Intellivision from Mattel.   There were a few games like football, baseball and I think hockey that we would play on a semi-regular basis but only with live people or against the game itself.   We’d also go out to video arcades to play ‘console video games like Battlezone (my all-time favorite).  We got to be so good at Battlezone that one quarter in the machine could last the whole night much to the displeasure of anyone else that wanted to play.    For these reasons I somehow feel that I have an understanding of how addictive and engrossing video games can be and what we had was stone aged in comparison to what is available today.   I do not play video games today because maybe, just maybe, I am afraid of what I might become.

As a parent however it’s difficult for me to understand how my son and others like him can whittle away the hours playing a game.  How can one learn about life playing a game with others wearing a headset from the comfort of a living room or bedroom?    I made that point to him about interacting with ‘real live people’ and how it must be more difficult to learn how to manage people without interacting with them one on one.   Gordon’s response was immediate and very enlightening if not completely surprising.   I am not quoting word for word but it went something like this:

“Actually I have learned about management when gaming.   As a guild leader (a guild is a group of online gamers each with a specific role to play in helping achieve a common goal given their talents and accomplishments within the game platform), and recruiter I have to pick the right team keeping in mind both their abilities and personalities.   Since conversations during the game occur in real time, there is constant back and forth while the game is played.   Some people respond well to being kicked in the pants (this has been edited just a bit), and others will absolutely not respond well to out-and-out public criticism and you have to handle them differently than the player who really does not mind being publicly told they are not getting it done and need to do better.”

This response shut me up – at least for a while.  The notion that one can learn management skills in a virtual environment was something that had escaped me.   Yet it makes sense to me more and more and virtual workspaces have yet to take hold the way I suspect they will in relatively short order.

Like the DJ Jazzy Jeff & The Fresh Prince song – ‘Parents just don’t understand’.   But maybe, just maybe we can learn a thing or two from our kids.  After all people learn differently today than when we were kids and so on.  I know I have learned things from my children.   How about you?