SO busy. Dropping in just doesn’t work any more 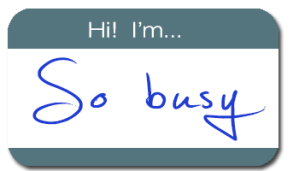 It’s gotten to the point where less and less frequently I call someone without arranging it beforehand. Do you schedule your calls with clients and prospects too? That happens with face-to-face appointments now almost exclusively. A far cry different from when I started in business in the 1980’s when you would just ‘drop in’ to see a client or prospect. You know what was interesting about that – the clients liked it and prospects would actually sometimes see me on a ‘drop-in’.

I did not have many arranged ‘play dates’ when I was a kid. We lived in a great neighborhood and after school the guys from the neighborhood would get together and most often play whatever sport was in season. But as we all had our own children the idea of arranged play dates became the standard. Not necessarily because the neighborhoods got any worse – some did and some didn’t, but because everyone was SO busy.

I propose that this spilled over into the professional world. When I was a young salesman, prior to the widespread use of mobile devices, people would call, there would not be caller ID in the office, and then believe it or not, you’d pick up the phone and have to talk to someone that you wished hadn’t called. That doesn’t happen today. Caller ID is pretty much the standard on mobile devices and even on many office phone systems.

In order to be sure you get to have that important conversation, people now ‘schedule a call’. More often these days people use a call-in number if there are multiple people on the call, or conference in others while on the phone with the first person called. The idea of an impromptu phone call to say how are you doing and to cover a few things is becoming a relic of my past.

The same is true of dropping in to see a client. Granted, in the 1980’s and 1990’s security in office buildings was pretty much non-existent (as well as unnecessary) save for companies like Exxon and Rockefeller Center/NBC in New York as I recall. You could walk into a building, take the elevator to a floor and canvas companies that were on your target list as future clients. Today for the most part, if you were to show up at an office building you likely could not even get upstairs without the security desk calling to announce your arrival. That does not work well even when you are doing business with the company as it somehow signals that you do not have respect for other people’s time. SO busy.

I am not being nostalgic here in pointing out that times have changed and so should approaches. Having scheduled appointments and phone calls accomplishes a very important business objective – actually having the meeting or call. People know when they are expected to be at the meeting or on the call and with a little luck have even thought about it and are prepared. Taking it one step further by preparing an agenda will make those meetings and calls even more productive. You need not necessarily send the agenda, just follow it so that there are come concrete outcomes. Then if you really want to go the extra yard, follow up with a summary of any pertinent thoughts or issues that occurred along with next steps.

There are aspects of dropping in that I do miss. The congeniality and ability to get to know people by seeing them frequently and not always so formally was beneficial as far as I am concerned. But those days are over and in the constant drive to be more efficient, random interruptions of people’s packed schedules are less desirable than ever. I admit that today I am no different.

I’m allowed to miss it a little bit right?