Why isn’t professional tennis marketed in the U.S.A? 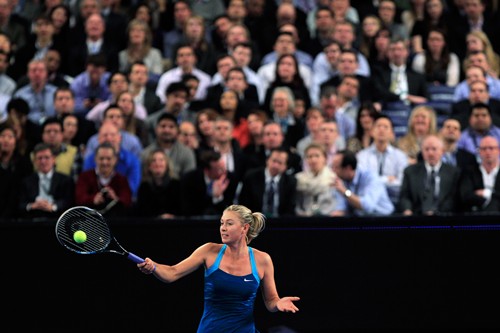 Interestingly the U.S. Open in New York City (held yearly in late August through mid-September) is the highest grossing sporting event in the United States on a per diem basis. But as many American tennis fans know there are few young American stars on the rise and attendance at non-U.S. Open tennis events is declining. The lack of rising American tennis stars plays a part in that decline here in the U.S. (as opposed to Europe and Asia where the game is increasingly popular as a spectator sport). But the lack of marketing promotion and support for the game on the part of the ATP and WTA tours is also responsible.

The top ten ranked players in the world both male and female all can speak English even though there’s only one American out of ten on the men’s side (Mardy Fish), and zero American women ranked in the top ten (Serena Williams is currently ranked 11th). With longtime top ten player Andy Roddick nearing the end of his solid pro tennis career and Serena being over 30, American tennis fans will have to root for non-Americans if they want to root for a champion – at least for the foreseeable future.

The cost of tickets for non-U.S. Open tennis tournament in the United States is a still relatively expensive proposition. True it is a day long experience (or a night long experience) so there is value there in that most sporting events are not scheduled for 4 hours or more as are most tennis sessions. The problem is that most people have no idea about the experience of going to a tennis tournament. The action up close is great to watch and a much different experience than watching it on television. In order for tennis to have an opportunity to regain some of its prior prominence the casual tennis fan has to be encouraged (via incentives, promotions, contests, sponsorships) to attend tournaments in their area.

Last night something called ‘Tennis Night in America’ http://www.tennisnight.com was held at Madison Square Garden in New York City. You probably had no knowledge of it but it was televised on ESPN 2 and will be re-broadcast in a couple of weeks. The evening consisted of two exhibition matches – one between Maria Sharapova and Caroline Wozniacki (both former world #1 players) and the other between Andy Roddick and Roger Federer (yes also both former world #1 players).

I did not watch as exhibition matches hardly constitute ‘Tennis night in America’ as far as I am concerned. By the way Ms. Sharapova defeated Ms. Wozniacki with Rory McIIroy (Wozniacki’s boyfriend and pro golf’s current #1 player) actually getting on the court to play a point with Sharapova (he won the point). Mr. Roddick defeated Mr. Federer bringing his career record against the legend to 2-12.

I think events like this do more to hurt the growth and promotion of professional tennis than to help it. Sure the players receive win or lose guarantees and there are a few laughs but nobody in the stands or on the courts takes it seriously. So how can it be Tennis Night in America?

Professional tennis could use a lot of marketing help here in the U.S.A., and yes we’d like to volunteer for the job. But somehow I don’t think the management of either the ATP or WTA is paying much attention.