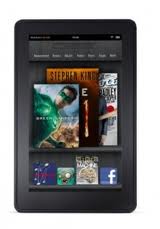 Amazon.com CEO Jeff Bezos presented the new Amazon Kindle – called ‘Fire’ this past Wednesday in New York. I’ve written much about the Kindle in general and had not planned to write about it particularly since yesterday’s unveiling offered few if any surprises. We knew there would be a 7 inch color screen, a touch screen, Wi-Fi internet access and a 30 day free trial for Amazon Prime (which includes unlimited, instant streaming of over 10,000 movies and TV shows and free two day shipping on millions of items) which if consumers do not opt out it will be an additional $ 79 renewable ‘gift’ to Amazon that would keep on giving year after year – Mr. Bezos is a smart guy indeed.

Besides access to Amazon Appstore, the Kindle Fire will include a cloud-accelerated “split browser” called Amazon Silk, free storage for all of the user’s Amazon digital content in the Amazon Cloud, built-in email app that gets webmail (Gmail, Yahoo!, Hotmail, AOL etc.) into a single inbox.

We also knew there would be no cameras (unlike the iPad), and no 3G or 4G network access (iPad’s have 3G and Apple is planning 4G access). The Kindle Fire 1.0 does not seem to me to be the iPad killer. The sale price was a bit of a mystery although most experts predicted $ 249 or less and it came out at $ 199. Amazon also released pricing plans for its entry-level black and white Kindle at $ 79 which makes it the least expensive e-reader on the market.

In releasing the Kindle Fire in front of the 2011 Christmas season at what appears to be close to its manufacturing cost, clearly Amazon is banking on increased sales of digital music, videos and books as well as other content if it is to make the new Kindle platform a winning one. The iPad (at more than twice the price) will continue to appeal to those that have the ability to afford it, and are desirous of the larger screen (a pain in the neck to carry around as far as I am concerned) and Apple App Store.

Other tablet makers as well as the Barnes & Noble Nook have great reasons to be concerned. The RIM (Blackberry) Playbook tablet is already gasping for air and the Kindle Fire will likely snuff it out completely. I believe sales of other popular Android based tablets (Galaxy, Xoom etc) will be impacted since there truly is another non-Apple alternative. If the Kindle Fire is not the iPad killer it may turn out to be the killer of many other tablets.

It’s also possible that the market for tablets could be split into two – a premium market headed by the Apple iPad and the everyday (lower end) tablet that is affordable to so many more people. It makes me wonder how many people will decide to own both devices. After all – does owning an iPad preclude one from buying and using an Amazon Kindle Fire?

As a serial early adopter I likely will pick up an Amazon Kindle Fire – 1.0. I still don’t have an iPad although I’ve used one several times and it is a great and cool piece of technology. I have and actually use my original Kindle and it still works fine. But many times since I bought the original Kindle I have wished that I waited for the 2.0 version which has been out for quite some time now.

Amazon would never tell but my burning question is how long will it be until the improved version of the Kindle Fire comes out? I can hardly wait. And that’s the problem.