Not all Boomers are OK Boomers 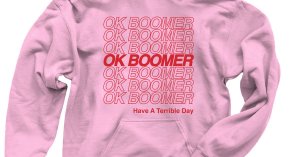 Memes can be funny and cutting at the same time.  But they can also generalize to the max. Given that I am a baby boomer I am very aware of the different ways Boomers process and react to the current work environment.  Because of the way Boomers came up through the ranks can be so different it cannot be expected that all end up feeling the same way.  That’s true of every generation before the Baby Boomers, and will be true for generations yet to come.

The article on NPR here addresses some of the general cluelessness of Baby Boomers.  I laughed a bit when I saw one millennial wrote that a Boomer with who she has casual professional contact noted ‘you look good today’.  And her reaction was – “And I’m like, that’s such a weird thing to say…”   So, by extension it’s a bit creepy to have someone you know note that you look good today?

As a late Boomer, here’s something that I am struggling with. Sometimes I compliment other men on their clothing, shoes or watch.  I have in the past (and not the distant past) complimented to women that ‘I liked your outfit’ or shoes or hair or whatever.  It didn’t seem creepy since it was simply meant as a genuine compliment, but now it’s viewed as creepy?  Times change.  We all must change with them.  But please excuse my sensitivity to an all-encompassing dis that is actually far from accurate or universal.  To wit, I still feel confident in holding doors open for people (men and women) and car doors for women (I’ve rarely done that for a man who wasn’t a relative).

Like every generation, Boomers come in ALL shapes, sizes and varieties.  It never dawned on me how it would be to be part of the ‘older’ and ‘out of touch’ generation.  For a long time I felt Boomers were kind of cool.  And it was more than just going to Woodstock.  Yeah, yeah, I know those days are over and people know that was a long time ago, but sometimes it’s ignored that not all Boomers behave in the same way.

‘OK Boomer’ lumps all Boomers together as one.  There are plenty of clueless Gen X’rs, Millennials and Gen Z’rs too.  To some degree people are all products of the environments in which they have experience.  Times and attitudes change, and some people are better at adapting to those changes than others.  Looking at life in the 1970’s and 1980’s via the lens of the 2010’s is going to reveal unenlightened viewpoints.  As would some of the American attitudes of the 1930’s and 1940’s might have looked to the subsequent Boomer generation.

30 years from now when the oldest millennials approach 70 years old some of the current viewpoints and attitudes will seem out of touch.  Meanwhile a meme has been born, and cashing in on it will have to happen in a hurry before OK Boomer becomes a forgotten phrase.

It cannot come soon enough for me.

2 Responses to Not all Boomers are OK Boomers