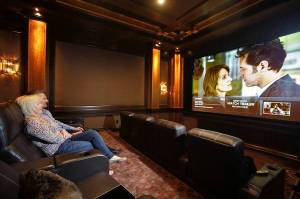 Last week Sean Parker (of Napster and Facebook fame) announced a new startup project, and as FORTUNE magazine put it “… called the Screening Room, that would allow users to pay to watch movies from home on the same day they’re released in theaters, according to Variety, which was briefed on the idea. The films would cost $50 per view, and would run on a $150 set-top box that would stream the movies over the Internet to users’ homes. In comparison, an individual movie ticket can cost anywhere from a few dollars to $30, depending on the theater.”

VARIETY countered by offering their version of the news: “Screening Room, the brainchild of entrepreneurs Sean Parker and Prem Akkaraju, offers movies for $50 at the same time as they open in theaters. It plans to charge $150 for access to the anti-piracy equipped set-top box that transmits the films and will give customers 48 hours to watch the movies. It represents perhaps the greatest challenge to theatrical release windows since a 2011 DirecTV initiative to offer movies on-demand while they were in theaters. That push resulted in a fierce rebuke from filmmakers such as Michael Bay and Peter Jackson.

There are reasons for this and lower ticket sales are at the top of the list. Yet I am surprised at the idea that this approach would seriously impact the movie-going business in the first place.

FORTUNE went on: “Despite the major cost difference, movie studios and theater partners have been grappling with ways to get more people to see their films. Last year, the Motion Picture Association of America (MPAA) revealed that theater attendance had hit its lowest point in 20 years, with just 1.3 billion cinema tickets sold across the U.S. That said, revenue has been skyrocketing in recent years, with 2015 global box office sales topping $38 billion for the first time last year, according to film industry tracker Rentrak. In North America, box office sales hit a record $11 billion.”

Variety had a slightly different take:

The National Association of Theatre Owners said that movie theater chains will individually decide whether or not to back Screening Room, but in a statement Wednesday (March 9), the exhibition industry lobbying group dismissed the startup, while reaffirming its commitment to theatrical release windows.

The group went on to say that any new distribution models should be created in consultation between studios and theater owners, not with the help of a “third party,” a clear dig at Screening Room.

“More sophisticated window modeling may be needed for the growing success of a modern movie industry,” the statement reads. “Those models should be developed by distributors and exhibitors in company-to-company discussions, not by a third party.”

I am a fan of disruptive technology and thinking. The back and forth here is interesting since obviously there’s concern about how cinema fans will behave. After all the folks that have those $5,000, $10,000 or even $100,000 (or more) home theaters would be prime target customers.

However, as good as home theaters can be – and they can be VERY good, home theater viewing will almost never be the same as going to the movies and it’s not because of the $8.00 giant tub of popcorn. No, movie-going behavior is deeply embedded in the psyche of Americans and movie-watchers all over the world. Most people will never pay $50 for a first-run movie and the experience of being at the movies with other people, gauging their reactions – good and bad, is an integral part of the experience. Look at it this way – live staged plays are ok when aired on TV (think of the recent live performances of The Sound of Music, and Grease, but being at a live stage presentation is vastly different – and better. Not only because the actors are live, but also because of the shared experience of seeing and being there in the audience – together.

So there’s room for both wouldn’t you agree? Or do you really believe the advent of home screening portends the end of movie-theater going?