Nobody calls anymore – are we less civil? 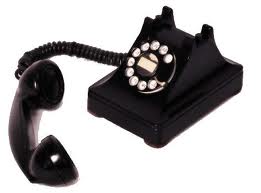 Remember when it was important to check for messages while you were out of the office for any length of time? I thought of this when I met a friend and business associate of mine recently for lunch and golf. While I checked my phone three times during the round for any urgent email messages (there were none) I did not call the office even once to check my voice mail. Five years ago it would have been different.
I don’t know about you but I don’t receive many telephone calls anymore – at least not without warning.

What I mean by ‘not without warning’ is that I find people increasingly prefer to set up phone calls by arranging a time to speak. The idea of giving a prospect or client a call just to check in is not looked upon the same way it was before there were smartphones. In fact it is often noted that those under thirty years old would prefer texting a message to actually having a conversation.

Here’s what I am not going to do. I will not wax nostalgically for the days when my own cold calls, other calls from vendor, and calls from people I do not know well, would take up a fair part of my day. I really do not like cold calling (never did), nor do I particularly relish calls from vendors that I don’t know well so I don’t miss those at all.

While it’s quite a bit easier to not have to try to call in from the seventh hole on a work day, I feel that all the ‘efficiency’ in planning a telephone conversation is removing some of the important human element in business relationships (and personal relationships too for that matter). We are all in such a hurry to get more things done and be more effective in these times of ‘do more with less’. Yet with all the increases in productivity we answer emails on evenings and weekends far outside of what used to be considered ‘normal working hours’.

So would more phone calls make things better? As we know email communication often makes it difficult to determine ‘tone’. Phone conversations are much better than emails to gauge how someone feels. It’s my opinion that people could spend more time talking with one another on the phone or better yet, in person.

With the advent of the texting generation and overuse of email people seem to have gravitated to talking at one another instead of with one another. Take a look at the United States political landscape if you want to see prime examples of a lack of civility.
Is the idea that nobody calls anymore contributing to an overall lack of civility?