Instapaper – do you want be the editor of your own personal e-newspaper? 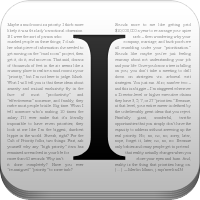 As a voracious consumer of information both online and offline I am finding it increasingly difficult to keep track of all the articles and stories that interest me. In fact it gets so bad sometimes that I find out halfway through an article that it is a different iteration of the same article with a different slant or skin.

To add to all that, even with all that I read I feel like I am missing things that I wished I would have read. Maybe there is now a solution. I can now create my own personal e-newspaper, using the Instapaper platform. I guess the name is okay, but the idea seems like it has a lot of merit.

In an article in the New York Times last week http://nyti.ms/dyVlV5 it was noted the founder Marco Arment created Instapaper for himself but his friends began asking about gaining access to his service. Mr. Arment had not apparently quit his day job (CTO at Tumblr) until just recently. He has not yet gone to outside financing either preferring to self-fund. At least for the present time.

Instapaper has an iPhone app as well as an I-Pad app. To date there are no plans for an Android or BlackBerry application although Mr. Arment has discussed an HTML 5 web versions that would cover Android devices. To put it simply, Instapaper takes online article content and saves it on your bookmarked toolbar.

There is competition in this ‘space’. Readitlater and InstaFetch (for Android devices) have been around for a while but the early buzz is that Instapaper is a preferable platform. As a BlackBerry user I am not feeling the love here at all.

If Instapaper gains in popularity Google Chrome to Phone has something to lose here. So I am wondering WWGD? We know Google can easily crush such an unfunded and under-resourced entrepreneur like a bug.

But I think there’s something so cool about one guy coming up with a concept, developing it and trying to make it work for everyone else as well as himself.

Will he make it? Would you buy the app?