Advertisers first and foremost must do no harm 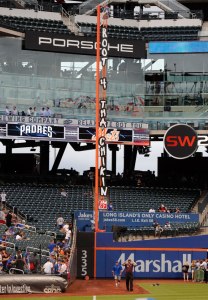 You’ve heard the expression as part of the Hippocratic Oath to which physicians abide. ‘Primum non nocere’ – First, to do no harm.

As it relates to marketing and advertising the basic tenet should hold, but does not always. Since advertising deals with the art of persuasion there are lines that can be crossed, but shouldn’t be. Millennials and Gen Z’ers are smart and are not putting up with old-fashioned low-brow advertising come-ons. This is a good thing overall and raises the bar which certainly can use raising. An inarguable fact is that when promoting a product or service we always want to portray that product or service in its most positive fashion. Sometimes advertisers go too far, but sometimes community outrage also goes too far.

Recently my favorite middling baseball team, the New York Mets, ‘sold’ the space on the foul poles which prior were painted Met Orange and BTW they should actually be called ‘Fair Poles’ since if a batter’s fly ball hits the pole it’s considered a home run. The new sponsor is Chick-Fil-A and now they are being called ‘Fowl Poles’. Hey c’mon that is funny.

I am not a giant fan of Chick-Fil-A, but I think it’s a brilliant ad space purchase. The Mets have been accused of ruining the game and being only about the almighty dollar but I ask – what harm is there really? Nobody is being tricked here and one can choose to simply ignore the ad (but it’s not easy since it’s RIGHT THERE on the pole where before there was…nothing). I am sure that there are many advertising folks that thought – ‘Why didn’t I think of that first?’

In contrast I’ve been following Hubble Contacts and recently it came to light that perhaps their great pricing on contact lenses are related to an overall lower quality compared to what people have come to expect.  Their offer is compelling but If their lenses could damage your eyes, just being cheaper isn’t much of a bargain.

As a strategist and amrketer, promoting a  product that is of no value to a consumer or user, or worse, can hurt the person in one way or another is being PART of the problem

As marketers, let’s agree to first do no harm. Then go sell something.