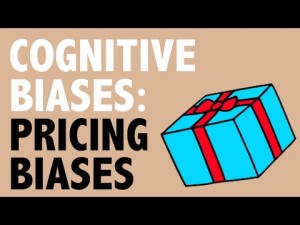 Many years ago (ok it was 1983), before he was a big-time star, I saw Jerry Seinfeld do a stand-up routine in Boston. He did a bit that went something like “I can’t compete with my father’s stories about the old days.” His dad would say “When I was your age a car cost a quarter and house cost a dollar” You win dad. It was clear that his dad had an internal pricing bias. I recognize this because I even see it in myself.

I’ve written about XM radio and how I felt the $15/month price was unreasonable and I avoided doing it for a few years. But I finally relented and admit that I like having it even though I am not in my car to get the benefit as much as some other people. It’s really a good service on long trips and I enjoy having the option. $15/month turned out to not be too expensive after all once I readjusted my own value proposition. Your results of course may be different.

On the other hand, from the moment Spotify came around I jumped aboard. The $10/month individual fee for unlimited choice without ads was a slam-dunk value proposition. Don’t tell the folks at Spotify but I’d be willing to pay more. Because I have in mind that back in the 80’s and 90’s I was buying lots of CDs (which I NEVER listen to anymore), and was easily spending more than $200 per year buying music.

I went through a period where I did not buy any music but listened to what I had purchased already. Unless you’ve been around nearly as long as have I you may not understand. Even now I am spending less yearly than I did all those years ago on a dollar for dollar basis. Spending $200/year on music in 1987 was not a big deal. And in today’s dollars $200 in 1987 would be $436.98.  It’s pretty clear to me that Spotify could raise prices a bit and afford to pay the artists more.

I have other pricing biases like hotel rooms. Having been around for a while I remember when $100 for a hotel room was a small fortune. Despite knowing that ‘things’ get more expensive over time it’s not easy to throw off the bias I have when I see a simple hotel room with no frills costs $200 or more depending on what city and time of year you are traveling. The $99 hotel room (which was quite adequate) in 1987 would be more than $200 today. In that context it doesn’t seem so outrageous.

Then there are airline tickets. Somewhat anomalous to the general upward trend since prices for airlines seats actually have declined in real dollars since 1987. And in 1987 there were still people smoking on planes, they served a lousy (but ‘free’) meal and the seats were uncomfortable. The Atlantic Monthly had an article about that in 2013. Yet people still feel that airline prices are too high. That’s a kind of reverse pricing bias.

How about renting an apartment in New York City? Back in the early 1980’s I rented a 2-bedroom apartment on Manhattan’s east side (it was a 5 floor walkup) for about $500/month. In 2017 dollars it would be about $1,100. And if you think you can rent a 2-bedroom apartment no matter how small for $1,100 you probably believe in the tooth fairy. Paying 40% of your salary to live in NYC is not at all unusual. My half share was probably closer to 25% of my salary back in the 80’s. (Clearly I was underpaid).

We Americans pay less for food today on an adjusted for inflation basis than we did 30 years ago. Yet we spend more to eat out than we did. I guess that leaves more time to ‘consume’ media and content. Americans also like to complain about the cost of gasoline and transportation (my monthly commute to NYC costs more than $350 and does not include subway fare in the city). This translates to $160 in 1987 which fairly closely matches what actually happened.

As it relates to marketing, pricing biases make marketing goods and services all the more challenging. Marketers put a great deal of effort gaining understanding how consumers (i.e. PEOPLE) are actually behaving at the same time trying to keep their own and our own biases out of the picture. BlueApron.com is a good idea but probably not sustainable if people actually don’t have the will and time to spend 30-45 minutes cooking. Throwing the unused food out drives people crazy. $10 for a home cooked meal seems like it might be ok until you realize that you have to do the cooking and take out is no more expensive and SO much easier! The price bias there is cooking healthy at home maybe should not be as or more expensive than take-out.

Those marketers that ignore the existence of pricing biases do so at their own risk. Not to mention their client’s risk.

Do you have any good examples of pricing bias?