The restaurant business is notably challenging. You’ve probably heard statistics like 90% + of all restaurants fail – apparently not true according to recent studies done by Professor Dr. HG Parsa.

In fact Prof. Parsa also offers that 59% of hospitality facilities fail in the period of 3 years. In the first year, is the highest level of failure, 26%, 19% in the second, and 14% in the third year of operation.

What about a restaurant that has been operating for more than 100 years? There are scattered representations including a number in New York City.   Famed places like Delmonico’s (1837), Pete’s Tavern (1864) one of my personal favorites Keen’s (1885) and to go WAY back, Fraunces Tavern (from 1762 and yes George Washington really did eat there) are well known around the world. A list can be found here   http://www.amny.com/eat-and-drink/oldest-restaurants-in-new-york-city-1.8999200

Then there’s the Oyster Bar Restaurant at Grand Central Terminal – the menu from each can be found here. First Opened in 1913, it has not always been the grand homage to seafood that it is today. In fact before 1974 the Oyster Bar was neither grand nor even good. It had fallen into physical disrepair and made the mistake of turning into a ‘Continental’ restaurant. I always hated that nebulous definition.

But in 1974 Jerome Brody was tapped to lead the resurrection of the fabled Oyster Bar Restaurant.  Today the Oyster Bar has both a classic and historic feel and its brand value is better than ever. Yet whenever I suggest that I meet someone for lunch or dinner at the Oyster Bar I am almost always met with “I never think of going there”.   Part of it is an error of omission. Unless you come through Grand Central Terminal on a regular basis you just may not even think about it as a dining option as it is downstairs in the terminal steps away from the food court, which includes a very popular Shake Shack. 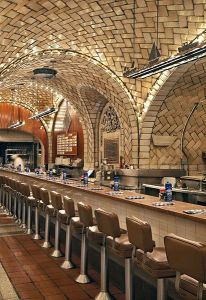 Step inside the Oyster Bar and it feels like you have stepped back in time fifty or even one hundred years. Sit at the bar and order raw oysters, a cold beverage and top it off with an oyster pan roast (best bargain in the house).   The feeling I get is that things have not changed much in a long time. The service at the bar is mildly friendly, a bit brusque and so perfectly New York City.

What if you do not like oysters? There are many other seafood dishes on the menu but for landlubbers it’s probably a salad kind of day.

I know exactly what to expect when visiting the Oyster Bar. A choice of dozens of different oysters all as fresh as can be, a true New York City experience, and a little walk through history right in front of your eyes. If that’s not a brand for the ages I don’t know what would qualify.