Sirius XM – Are they serious? 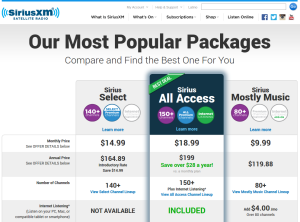 Having recently completed a 3,650-mile drive (that’s nearly 5,900 kilometers for my non-U.S. readers) over a three-week period, I was thankful for the ‘free’ trial offered by Sirius XM Satellite radio.

It’s the second free trial for the car I lease and was offered to me after a recent minor service. I’ve had the trials in the past that come automatically with new car leases but I’ve never subscribed as I don’t normally drive long distances on a regular basis.   For those that do not know the current Sirius XM subscription price is U.S. $14.99/month plus tax (apparently it comes out to more than $19.00 monthly. That’s more than $200 annually and simply not worth it for me.  The up to date package prices can be found here.

I did enjoy the variety available on satellite radio and as I began to think more about it I wondered why Sirius XM does not offer tiered subscriptions based on how much time per month a subscriber might listen.   There has to be an overall monthly average (number of hours subscribed are active divided by the number of subscribers) whether that’s 10, 25, 50 or some other amount of hours.

To be clear, I feel I’d be willing to pay $7 per month and if I were limited to 10 hours or something like that I likely would consider subscribing. I’d also like the opportunity to buy more time (which would cost more per hour than I had subscribed at the normal price) if I so desired. It would be much like the way that Verizon and other mobile carriers handle customers that go over their subscribed data usage.

Perhaps Sirius XM is not able to track individual usage by vehicle? That’s hard to believe, but possible. And of course subscribers also are able to listen over the internet as well (of course that all access pass costs even more – $18.99/month plus tax)  but shouldn’t it all be trackable as well?

Full disclosure, in 2009 I wrote  that the second Howard Stern (he started on Sirius back in 2006) deal on XM would not work and that satellite radio was doomed to fail. Obviously I was mistaken, at least so far. As reported by Sirius XM there are roughly 29.6 million subscribers. It claims to be the largest radio company. Doing the math – $14.95/month x 29.6 million subscribers = $442 million per MONTH in revenue. Keep doing the math and it’s more than $5.3 billion annually.  Only it isn’t, at least not exactly.

A friend of mine noted that Sirius XM makes deals on an individual basis. You don’t want to pay $14.95/month? Call them up and they will drop the price. I have not tried this. Yet. So it follows that 2015 revenue as reported by Sirius was $4.6 billion. That’s $700 million in deal making. It works out to $12.90 per month per subscriber. No matter what, there’s ample revenue to track both individual subscriber usage AND behavior.

As a marketer it’s been difficult to recommend that our clients advertise on Sirius XM since their programming is unrated. While program rating companies like Nielsen et al are themselves being disrupted, there are not other metrics that allow us to offer adequate performance indicators unless direct response is employed.

And then there are Sirius XM user reviews. I looked through several review sites like this one and let’s just say that I had a difficult time finding a significant number of positive reviews. In fact now I am a bit concerned about the full on assault that I might receive if and when I decide to not subscribe. I expect that Sirius will try to auto bill me and I will have to call to get them to cancel. This is based on my reading various review sites.

What I am more likely to do is to call Sirius XM (since I have to anyway even though I’d much rather do it online), and see if I can get the price at $7/month or less. Wish me luck. I am not all that optimistic.  They have a Sirius “Lite” (my word not theirs) version for now $10.99/month but that is not at all attractive to me.

I do know a number of people that subscribe to and enjoy Sirius XM satellite radio. What they all have in common is that they are all basically well-to-do and the $18.00+/month charge is not significant for them AND they feel they are getting value. That’s all well and good but I believe Sirius XM is missing a big-time opportunity to grow their business, be more customer-friendly and provide more value to subscribers.

For the record, I also have a Spotify subscription (which I love – now there’s a high-value proposition) and could (and sometimes) do just as easily stream Spotify while driving. Yet I like having radio stations that curate things and find that when I listen to radio I am introduced to artists that I may never have come across elsewhere

So Sirius XM – are you listening?