Is Amazon too big to care?

Posted on December 3, 2014 by markkolier 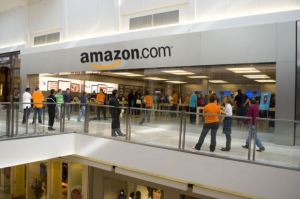 The NY Times on Tuesday published an article on Amazon.com and the idea that the company works on ‘disrupting itself’. Scott Galloway of L2 is extensively quoted in the article ‘arguing’ that Amazon does not want to own a piece of retail but ALL of retail.

Also of interest in the article is that Amazon is readying the opening of its first brick and mortar store. Right here in Manhattan in fact across from the Empire State Building only a few short blocks away from my office. I wonder what kinds of things Amazon will feature in the store which is slated to open ‘in time for the holidays’ – whatever that means.

Amazon is now nearly 20 years old. With the recent settling of the Hachette dispute Amazon has lost some fans if not some credibility. Since I am somewhat of an aspiring writer I watched the Hachette proceedings with great interest. However I am also an inveterate reader and the idea of Amazon beating up writers and publishers to offer books at lower prices by holding down royalties ends up being a double-edged sword. If you have followed recording artist Taylor Swift’s recent tiff with Spotify.com you know that business disruption is the standard these days independent of industry.

So is Amazon now too big to care? I don’t think so but it sure can appear to be that way.   Amazon CEO Jeff Bezos bought the Washington Post last year and to date there is not an indelible Amazon mark on the venerated publisher. At least not yet.   There are some signs that Amazon is too big to care – lack of response to customer complaints and/or suggestions are mentioned in the article which while not surprising are disappointing from a company that likes to think of itself as making things better. We should expect more from Amazon.

The Kindle Fire tablet is improving (I still have the original Kindle Fire which is just an ok tablet at best); the Fire Phone has been a sales disappointment. It does seem apparent that Amazon wants to touch any and every part of your life in some way, shape, or form. A bit insidious but no cause for alarm, right?

Mr. Galloway suggests that Amazon will be opening ‘dark’ stores – places where customers can pick up items, although an Amazon spokeswoman said in a statement that the 470,000 square foot (!!!) building was “primarily” corporate office space.

If more Amazon brick and mortar stores are to be opened in the coming years perhaps existing locations of struggling retailer Radio Shack might be a nice fit. There are times that people would welcome the opportunity to return an item or have a physical store with real people working there handle an inquiry.   In turn that just might show that Amazon is not really too big to care.

Of course I could be completely wrong. What do you think? Is Amazon too big to care?