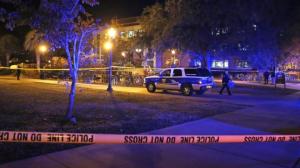 I was planning to write about Facebook and why people ‘like’ brands.  But when I woke up this morning I learned of another round of shootings on a U.S. college campus – Florida State University in Tallahassee, Florida.  Here in the United States this has become sort of a regular occurrence and most shockingly it’s no longer a shocking thing to hear about a campus shooting.  But this one was different.  Our precious daughter is a senior at Florida State.

Immediately upon looking at my phone I saw the texts, emails, and calls, all with well wishes and a desire to know if our daughter was ok.  She was indeed although my initial thought was that it would be highly unlikely for her to be in the library at 12:30 AM.  After all it’s not something I ever did back in my college days.  I came to find out that I was completely mistaken and in fact at times our daughter has been in the library at 2AM – just not last night.  Then I felt sick.

Once we knew she was out of harm’s way (for the moment) the question was ‘did she know the shooter who was shot and killed by fast responding Tallahassee police, or either of the three students that were shot?’  She did not.

Should there be tight security (metal detectors and screening) now in college libraries?  Apparently that’s what we’ve come to here in United States.  It’s no wonder that I hear from my friends and associates in other countries that it must be like living in the Wild West in the United States  I find it hard to argue that point.  We Americans all seem to agree the situation is completely out of hand.  And then we go back to business as usual.  Protecting our somehow inalienable right to carry firearms is somehow foundational to being an American to enough people that the overall situation never changes.  We complain, we complain, we complain, but nothing gets done.

Every time I walk into Grand Central Terminal I think it’s the least safe place to be in New York.  Sure there are what I see as an increasing amount of armed police and National Guardsmen omnipresent.  Yet the other day I had just returned from an out of town trip and was taking the train back to the suburbs and was wearing a big somewhat heavy backpack rolling an overnight back next to me.  If it were not me, that backpack might not have contained a laptop, some papers and cords, a tired banana and lots of pens.  It could have contained something much more dangerous. None of the police or guardsmen thought to give me a second look – perhaps I don’t exactly fit the profile?  Or perhaps at 6PM during the height of rush hour it’s simply too difficult to try to pick out persons of interest?

Here’s where it all could be going – security EVERYWHERE.  Airports and courthouses have thorough screening processes.  Schools from pre-K through university will have to employ these same measures, as will hospitals, commuter trains, arenas, stadiums.  You may need to plan to arrive three hours before any event so that one by one people can run their belongings through a detailed screening process.  It’s already happening in some locations (stadiums and arenas).  Why not movie theaters?  Broadway shows?

‘Just’ another college shooting has become an event closer to my home and heart, and I find it incredible to believe that my fellow Americans could feel the right to carry weapons anywhere they go should outweigh the safety of innocent people.  The rest of the world thinks all Americans walk around packing concealed weapons in the interest of self-protection.  While that’s far from the actual case, it’s hard for me to understand how second amendment protections are benefiting a majority of Americans.

I will write about FB some other time as I am not feeling it today.

What will it take to have things change?

10 Responses to Another college shooting hits closer to home