Truth in advertising can make for a lukewarm message 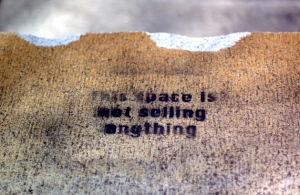 I’ve been watching a little (ok more than a little) bit of basketball recently with the NCAA and the NBA in high season.   Since sporting events are among the last events that I watch live on TV I have seen and seen again the same rotation of ads that are run by the broadcast and cable networks.    One ad that I’ve seen a great deal lately is an ad for the GMC Acadia SLE-1.     It’s an SUV if you are not aware.

All the spots have the same tag – you can watch one here.   The tag is ‘Now lease the 2013 GMC Acadia SLE for around $299 per month.’   The first time I heard that I did a double-take – AROUND $299 per month?   Since when has any product advertised itself as having a price in that fashion?     We’ve heard for years the ‘starting at $299 per month’ and people are conditioned to expect that starting point means the price only gets higher.

So what exactly does ‘around $299 per month’ mean?   More importantly, I am wondering why the change from ‘starting at’ to ‘around’?    Am I as a consumer meant to figure outonce I have added whatever options I choose, taxes, license and all the trimmings that the $299 will be $350/month?   $375/month?   And why now?  Did U.S. FCC regulators encourage GMC to be less misleading and promote an ‘around’ price?

Whatever the reasons are, what is left behind is an offer that is less compelling and less motivating as far as I am concerned.  At the very least, good product promotion and advertising should leave a positive brand impression and help move the prospect closer to purchasing.   I can’t say that on the basis of the GMC Acadia spots the brand has gained or lost in my view, but I am put off by the nebulous term of ‘around’ when it comes to pricing.    If this becomes a trend one of the next things you could see is an airline advertising a fare for around $200.    How would you evaluate buying a ticket in that instance?

What do you think?  Is there a difference in your mind using ‘starting at’ versus ‘around’ when it comes to advertising price offers?