Have you pre-ordered your own personal drone?

Posted on November 5, 2010 by markkolier 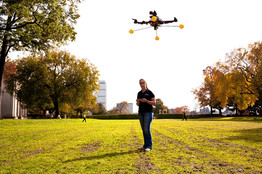 Articles this week in the Wall Street Journal http://on.wsj.com/aMR2bD and the New York Times http://nyti.ms/bLeAiA both covered the emergence of new technology that could be very useful while (to me) being extremely frightening at the same time. You can now think about owning your own personal drone. Ok maybe you have not given the idea much – or any – thought but the same might not be true of your neighbors.

Think about miniature flying drones ‘mounted with tiny cameras’ for the bargain price of $ 300 it was noted that personal drones would certainly not be welcomed by celebrities. The idea has generated the interest of the Federal Aviation Agency (FAA) which of course controls United States domestic airways. From the Journal article – ”The FAA doesn’t have explicit rules governing such uses, but Ms. Brown said an advisory that applies to pilotless drones recommends—but doesn’t require— that such aircraft be flown away from populated areas; away from regular airplanes; at an altitude below 400 feet; and that airports be notified if the craft is flying nearby. Mr. (attorney Raoul) Felder said the recreational exception could provide clever lawyers with an opening for use of the drones.”

”The ability to share software and hardware designs on the Internet has sped drone development”, said Christopher Anderson, founder of the website DIY Drones, a clearinghouse for the nearly 12,000 drone hobbyists around the world.

Let’s forget for a moment that there is a group of 12,000 drone hobbyists as I am having difficulty getting my tiny brain around that one. The military uses make total sense to me. But the idea of citizens having their own ‘personal drone’ to ‘keep an eye on things’ is (to me) a sure sign that the apocalypse is nearly here. The fact that they can only stay in the air 30 minutes at present is hardly a salve. For young Moms whose offspring are on that neighborhood play date things would never be the same. Once a kid comes home and says ‘Jimmy hit me’ and like Warner Wolf all Mom has to say is – ‘let’s go to the videotape!’ Or at least the digitally recorded files.

Mr. Felder, the divorce lawyer, said clever attorneys will find ways to get around FAA restrictions, perhaps by claiming their drones are for personal use—a distinction that should steer clear of FAA rules.
“This thing would be totally legal. There’s no violation of anybody’s premises,” he said. Thrilling.
Reassuringly the article in the Journal noted that Navy fighter pilot Missy Cummings predicted it’s just a matter of time before drone technology and safety improvements make the gadgets a common part of the urban landscape.

Privacy issues could emerge if such drones become common. While the military has rules of engagement governing drone use, there is no similar set of rules to protect privacy for domestic use of drones.
“If everybody had enough money to buy one of these things, we could all be wandering around with little networks of vehicles flying over our heads spying on us,” Ms. Cummings said. “It really opens up a whole new Pandora’s Box of: What does it mean to have privacy?” Of course there is the positive idea that personal drones would no doubt cut down on paparazzi car crashes since it would put a whole new spin on celebrity pursuits.

Be afraid. Be very afraid.

Are you as afraid of this technological leap as am I?

3 Responses to Have you pre-ordered your own personal drone?