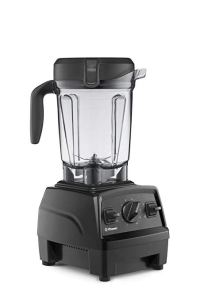 So how does a company like Vitamix proudly charge WAY more for its product than almost all the other market competitors?   Without a substantial advertising budget? In the past Vitamix has run TV spots – but I’ve not seen one air in real time.   There are other brands like Blendtec, Hamilton Beach, Lancer, Waring, Bullet, Ninja, Froothie, and Vortex, but Vitamix remains the market leader.   Almost all of the competition sells at a lower price and in some cases a MUCH lower price.

I remember when we bought our Vitamix blender after seeing it demonstrated at Costco. The in-store demo was cool and it was clearly expensive at between $400 and $500. We also bought it more than eight years ago. It’s a little battle worn but works just as well as it did the first time we used it. For something that gets used in our house every day, multiple times per day sometimes, the expensive one time cost has ended up being not so expensive. The noise that it makes is loud and obnoxious when it’s crushing ice and whatever else we put in there. But it works. And it’s generally very easy to clean.

I found this review on CNET and I had no idea that Vitamix had been around for more than 80 years and was a very early TV advertiser – an infomercial at that! They were originally a direct response company and that kind of warms my heart!

William Grover Barnard, the founder of Vita-Mix, released his company’s first blender in 1937, but it wasn’t until television came around that Vita-Mix was able to introduce blenders into the American vernacular. Buying 30 minutes of airtime on WEWS-TV in Cleveland, in 1949, Vita-Mix ran what the company says was the first-ever infomercial — before long, blenders were flying off of the shelves, and Vita-Mix was rerunning the ad in markets across the country.

Today, the Vitamix craze continues, with a small army of brand loyalists who swear by the things, insisting that they’re worth every penny. That’s quite a claim, given that a model like the Vitamix 7500 will cost you exactly 52,900 pennies ($529). We’ve already looked at some impressive blenders from competitors like Ninja, Breville, and KitchenAid, all of which will cost you around $300 less than the Vitamix. And don’t forget about the ultrapowerful Blendtec Designer Series WildSide Blender, of “Will it Blend?” fame — it’s competing with Vitamix too, and at a price of $454.95, even it costs less. Is a Vitamix blender really a justifiable purchase?

The article goes on to note:

For some, I think it will be, but for most, it’s probably an unnecessary splurge.

For me the # 1 reason Vitamix leads the pack is that VITAMIX CLAIMS TO BE THE BRAND OF PROFESSIONALS – Vitamix has claimed the ground that it is and always has been the blender of professionals. It’s very, very powerful. Take a look if you visit a cocktail bar and more often than not Vitamix is the blender of choice. The fact that Vitamix can take the almost constant use in a bar or restaurant, is a big confidence builder for non-professional buyers like me.

For those with the means, it’s rather unsurprising that people will pay 3x or more for a Vitamix than other products on the market. If you can afford the best why settle for less? Yet the durability of the product has proven to me that it is more valuable over time. I am sure that a Hamilton Beach blender of the past or an Osterizer of the past could not handle the punishment we put the Vitamix through. Today those companies have ‘pro’ series blenders that are much more powerful than the versions of 30 years ago. I could not find one Osterizer priced above $100. There are none as powerful as the Vitamix in terms of horsepower. But I am guessing they work just fine for most home uses. As for their durability I can’t say as we’ve never used a blender as much as the Vitamix nor have we consistently challenged our blender with ice, frozen fruit, whole vegetables etc. so I have no frame of reference on how these less expensive blenders hold up.

Blendtec which is referenced above, did a brilliant advertising campaign starting back in 2006 called ‘Will it Blend’ and they would blend unusual items to show off the power of the Blendtec. It was fun and did a great job demonstrating the product. Blendtec is the closest competitor to Vitamix reviewed by Consumer Reports –  and other comparative sites like Blender Versus … They cost about the same. Vitamix has more market share and has consistently good ratings.

How long should a blender last? If my personal is any barometer – a long time as I recall having blenders last more than a decade. And in pre-smoothie days, we never put the older blenders through what we now routinely do with the Vitamix.

Product demonstration as advertising and excellent ratings and reviews have enabled Vitamix to stay on top even without what might be seen as traditional advertising. Coming from the high ground Vitamix occupies, Imagine what they could do if they did?

The Internet's Number One Site For Old-Time Baseball Photos And Essays, Over 1200 Articles, All Fully Categorized For Easy Access. Current Blog Topic: "Who is the Mystery Person"?