Change takes longer than people wish but it does happen 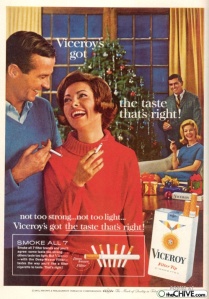 The news this week came out that cigarette smoking among American high school students has dropped again. That’s of course really good news for the general health of Americans.

From a December 16th article in the Wall Street Journal:

“Daily cigarette smoking has plummeted among high-school students, falling 50% or more over the past five years, according to a new government-sponsored study.

In the University of Michigan survey, backed by the National Institutes of Health, 3% of 10th-grade students reported smoking cigarettes daily, down from 6.6% five years ago. About 5.5% of 12th-graders said they smoked, down from 11% five years ago, and 1.3% of eighth-graders, down from 2.9%.

The percentage of 10th-graders who report daily use of marijuana is now higher than cigarette smoking, not because marijuana use is on the rise but because so many fewer students smoke cigarettes, said Dr. Nora Volkow. “The results are quite spectacular,” she said.

Tabby Block, a 17-year-old high school senior in San Francisco, said she can recall going to parties a few years ago and seeing many students smoking, but now only a tiny percentage of her classmates smoke daily and they are ostracized. “It seems stupid to do something that could give you cancer,” Ms. Block said. “It has a stigma.”

The study, known as the Monitoring the Future, surveyed about 45,000 students from more than 380 schools nationwide. It found that teen use of electronic cigarettes continued to outpace use of traditional cigarettes. About 16% of 12th-graders reported using an e-cigarette over the past month compared with 11% who reported they had smoked a cigarette.”

Before the risks and dangers were publicized cigarette smoking flourished in the United States (and later around the globe), its use growing exponentially in the 20th century.

Anti-tobacco sentiment dates back to the 1890’s and before.

The decline in smoking amongst the youth of the nation bodes well for the future health of Americans, as the habit will simply not be formed on such a widespread basis.

I grew up with two parents that smoked cigarettes and at times nearly chain smoking. They would smoke in the car. With the car windows closed. I remember this since my sister and I were often riding in the back. That was enough to deter me from cigarette smoking for my entire life.

Major tobacco companies have being doing everything in their power to hold on to their customers and e-cigarettes and ‘vaping’ are now foundational to their prospects for future success. However with regard to the ‘coolness’ factor of smoking cigarettes, the behavior has now been forever changed and cigarette smoking will never be the way it once was both in sales and perception.

If you do agree, how long do you think it will take? It took cigarettes almost 150 years to get to that status. Processed foods date back to even before the 1940’s http://www.barharborfoods.com/blog-detail.php?A-Brief-History-of-Processed-Foods-155.

Surely 2090 is a too long a time from now for processed foods to become uncool?