Ah to be in Paris – this Thanksgiving 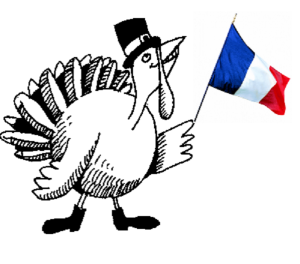 As I have posted about both that Thanksgiving is my favorite holiday and also about whether there is Thanksgiving in China, ever since the unfolding of the terrible events in Paris last Friday, I’ve been thinking I wish I could celebrate Thanksgiving in Paris.

No I would not expect any turkey although I am certain that if one wanted to have an American-style Thanksgiving meal in while in Paris whether that be in a restaurant or at home it could be accomplished.   And I checked.

Yet it’s quite appropriate to think about Paris and the French around Thanksgiving. After all France was instrumental in helping the United States attain its independence. And for whatever reason we Americans have an affection for Beaujolais Nouveau at Thanksgiving due to smart marketing by Georges DeBoeuf for example.

I love Paris. I’ve only been there a couple of times and never for more than several days. My wife and I both speak French (and my wife lived in Avignon for six months during her university days) and talk about going to Paris and France often.   Now the desire is stronger than ever.

Why? Paris is a truly international city – like New York. The pace and vibe of Paris is unlike any other place. It’s vitally important that the vibrancy that makes Paris a great world city be maintained and even nurtured.   When I think of Paris today I think of Parisians and French people that are so varied when it comes to background, race and beliefs. And somehow it works. Not perfectly but it works.

After 9/11 here in New York, there was a real need to get people to come back into the city (Manhattan in particular where the Twin Towers fell), to go out to restaurants, museums and Broadway shows.   We New Yorkers were grateful for the support received from our own citizens as well as tourists and visitors from around the world that heeded the call to come back into the city.

As is the case in Paris now, after 9/11 the American people and New Yorkers in particular were and are disturbed, frightened, appalled, and angry just to name a few emotions. The 10th and 11th Arrondissements in Paris which attract so many young people – (millennials were prime targets), are indeed an attack on the Paris life and joie de vivre that goes hand in hand.

Most Americans do not have the wherewithal to, at the drop of a hat, jump on plane and jet to Paris for a few days. Like New York City, Paris is expensive – and amazing. So while I wish that our immediate plans could be changed to celebrate Thanksgiving in Paris to show my support and love for the people and customs there, I will also relish spending the day with family and reliving a rich tradition.

And I vow to get to Paris in 2016 as soon as I can. With a little time and planning it does not have to be super-expensive proposition and it’s the least I can do.