Commuting and stress – can you relate? 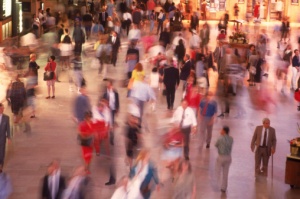 I’ve written about commuting to New York City before.  http://wp.me/pn6jX-jG    http://wp.me/pn6jX-RG .  But I was speaking with a friend recently regarding commuting and he encouraged me to share my description of what it is like.  Living outside of the city and commuting whether it’s every day as I have done for part of my career, or a few days a week as I do now, offers a great contrast in how my day starts and my morning commute winds down the moment I step off a train in Grand Central Station.   I suspect every commuter can relate.

It’s a cool morning in the suburbs of New York City (but it really could be any city around the world).  Ok maybe if it’s Hong Kong there are not too many cool mornings but you get the idea.  It’s quiet in the suburbs and the sun is just coming up (well at least some of the year).  There are birds singing, pretty trees and the air smells fresh and clean.  I enjoy the routine of commuting into New York City since what I actually do in the morning is not all that different than what I do when I do not commute.

Most days I wake up, click on the local NYC news to find out if there are any problems with the commute or weather issues.  I shower, have coffee and breakfast, read emails), and catch up on what’s going on from a variety of sources – reading both online and an actual printed newspaper (we get two at home).   I am always on the lookout for interesting and relevant information on behalf of my friends, clients and colleagues.

Most days I am feeling pretty relaxed as I leave the house for the train station.  I am not too concerned with which train I catch since they run fairly frequently, though not  punctually, so when a train headed to Grand Central arrives I just get on it.  Spending the time in the morning on the train is quiet time and there’s not much conversation on a train that is on the move around 7AM.  This is in stark contrast to the return trip home which is much noisier.

That groove that I am happy with on the train; reading, thinking, contemplating, is one of the most enjoyable parts of my day.  It all comes to an end in the dark tunnel that starts at 97th Street and Park Avenue as people begin to gather their belongings and line up to exit the train before the poor souls that remain sitting down reading or sleeping. The race is on.  And so is the stress level.

We commuters file out into the city streets in waves – often waiting to climb a staircase as the volume of humanity streaming out of the train overwhelms the track exits into the station.  I notice my gait picks up just in order to keep up with the masses.  So does my heart rate whether I want to admit it or not.  I make hundreds of mental calculations on where to walk, who to walk in front of and who to go behind, and a critical skill is to know when to cross through the flow of people moving at a 90 degree angle – without breaking stride.  If you don’t do this you are much like a salmon struggling to swim upstream.

Exiting the station the choreography continues.  Timing the lights, walking diagonally across the street so as to be as completely efficient as possible in order to minimize any wasted time.  Walking between cars, buses, taxis all are part of my daily flow.  Using cars or pedestrians as screens from oncoming traffic (hey they’d get hit before me), it’s so ingrained that I do all of this without even thinking.  If it is raining a new dynamic is introduced, that is the dance of umbrellas which take up valuable space and serve to keep people dry (for the most part) but slow down the process.

The walk down Park Avenue is decidedly different (and more peaceful) than the walk down Madison Avenue which is chock full of buses and exhaust.  But in the interest of efficiency I eventually need to find my way over to Madison Avenue and its cacophony.

Finally I am on the street where my office is and I churn all the way to the front door.

Arriving at the office I take a deep breath and do my best to ratchet down the stress level that is only really ten to fifteen minutes old.  It’s quiet in my office and I can begin to regain the groove that started my day.

While I have spent nearly all my professional career in New York City, my travels around the world have shown me that it is not all that different in other cities.

The rat race really does exist and it’s up to each individual to find ways to cope. They don’t call us mad men without reason.