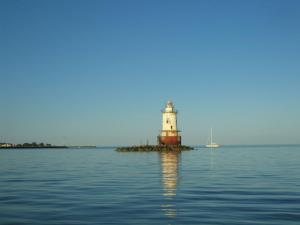 The view in the photo is much like that which I see every morning on my commute to New York City by train that for at least part of the ride trails the Connecticut shoreline.   I am finishing my first full year of daily commuting and early in the year I became aware of a beautiful vista that appears each morning for about fifteen seconds.    For whatever reason I find that view to be something I do not want to miss (and rarely do), independent of the weather – winter, spring, summer, fall, rain, shine, snow or sleet.

Sometimes I watch a single skull oaring up the channel toward Stamford.  Other times I notice crew eights rowing at 7:30 in the morning.   I try to sit on the left side of the southbound train in order to have the best possible view.  At times like this I think about breathing and meditation although I’ve not done much more than think about those things.   I know I need to work on that.

Fifteen seconds.   It’s easy to say it goes by so fast – because it does.  However I am able to reflect on those what I consider to be precious seconds at various points of my day.   In the fall and winter when it is dark on the ride home I am disappointed that I am unable to see it for the second time that day.   The sight of the sun setting over the Long Island Sound with the view of Long Island in the distance (as in the photo) gives me a momentary sense of peace.

My 20 year old daughter reminded me that in Florida where she goes to university, so many of her fellow classmates have never even been on a train.   For most of the country a daily train commute is a foreign and unfamiliar concept.   We city and suburban people who ride the train every day have a very different morning routine than most other Americans.

I’m on record that I have little problem with my train commute each day – aside from the frustrations with Metro-North that me and all of my fellow passengers have to endure on a daily basis.   Trains are always late (not usually more than ten minutes though) and there have been major service disruptions along the way.   The view is not all that different if one drives down Interstate 95.  But the effect at least as far as I am concerned is not even close to what I see and feel while riding the train.

Fifteen seconds of morning glory.   Do you have anything you notice or do that offers you that on a daily basis?