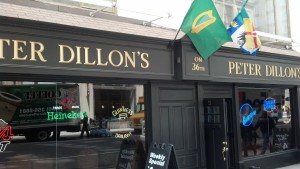 The restaurant business is a difficult one in the best of times.  I know this from having several friends in the business – some of whom are successful, others that have been somewhat less than successful.    I am consistently amazed when I see new restaurants open in either the strangest of locations, or in a location that has had a string of failed restaurants.

I work in New York City on East 36th Street between Madison and Fifth avenues.   When we moved in this past December there were two Irish pubs nearly across the street from one another as well as another well-known NYC watering hole (Gingerman).     In addition to those establishments there are four other restaurants plus a Pret-A -Manger on the corner.    For this reason we were all surprised (not unhappily), when yet another brand new Irish pub called Peter Dillon’s opened this past winter.

It is true that the three existing local pubs on our little block get crowded around Happy Hour.   So perhaps the owners of Dillon’s felt they had an answer to their perception of an unmet demand.    Inside the bar is a dark and attractive interior with a dozen tables and a nice long bar.   The feel inside is a bit cold; lacking the inviting warmth of what I find makes Irish pubs worth patronizing.

I walk past Dillon’s frequently during the lunch hour and I never see anyone in there.   My reason for walking past is that Dillon’s is strictly a bar, it does not serve lunch or dinner while all the other establishments do.   In fact not only do the other places serve lunch and dinner, but two of them, (Slattery’s and Galway) serve a $10 lunch special – a limited but good lunch menu and a beer (or non-alcoholic beverage if that’s your preference).   People stream into both Slattery’s and Galway while Dillon’s sits there unoccupied.

What were the owners of Dillon’s thinking when they thought to open a brand new (the renovation had to be expensive) third Irish pub within 300 feet of the competition?    Then to top it off, why be a ‘pure’ bar instead of a bar-restaurant?   I realize that serving food is a big deal compared to serving drinks only, but the Dillon’s business plan should have had a competitive analysis of the local marketplace.  And now that people have gotten into the habit of not going into Dillon’s, a turnaround to popularity will be more difficult than an initial opening.

I’ve only been into Dillon’s once for a drink after work.  There were a few people there but not very many and as I noted I marvel every time I walk by at lunch and the place is completely empty.   I don’t expect it to last through the summer if it takes that long.   For whatever reason it just makes me sad to watch while it unfolds in slow-motion.

Opening a business with a bad plan will always result in failure.   The work done upfront makes all the difference and there are no shortcuts.   At least that’s the way I see it.