WalMart tightropes the brick and mortar world to the online world 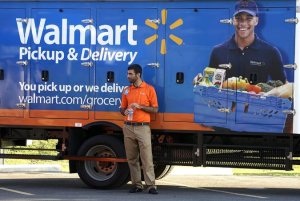 Maybe you missed it last week. The little Article in the New York Times – Reporting that Wal-Mart is falling behind in the area of online sales – far behind Amazon.com for example. In the world of online sales WalMart already is a titan, ringing up more than $1 billion of sales a day. Read it again. $1 BILLION of sales per day! And they are falling behind.

From the article on June 5, 2015 and reporter Hiroko Taguchi –

“But in the online world, the retailer’s business, while growing, remains far behind Amazon. With less than one-sixth the online sales of Amazon, Walmart has been repeatedly outgunned and outsmarted by Amazon’s price-matching, robot-utilizing, competition-crushing machine.

And now that sluggish sales are persisting at its supercenters, and with consumers spending more and more time shopping online, Walmart’s need to play catch-up in its online business loomed large at its annual shareholder conference on Friday.

Doug McMillon vowed to tackle that quandary as part of the changes he outlined as the company’s relatively new chief executive.”

“One customer can shop with us in so many different ways — in stores, on their phones, at home,” Mr. McMillon told 14,000 shareholders and Walmart workers gathered at an arena outside the retailer’s Bentonville headquarters. “We’ll win one customer at a time.”

“As part of its effort to become competitive on the web, Walmart has made a flurry of tech hires, committed to a billion-dollar war chest and announced a delivery program to challenge the king of online orders, Amazon Prime.

Walmart is set to start sending invitations this week to a pilot program called Shipping Pass, which offers unlimited, free three-day shipping from its online store for $50 a year.

Shipping Pass is a direct challenge to Amazon Prime, which charges shoppers a $99 annual fee for unlimited, free two-day shipping. It is also a desperate bid by Walmart, analysts say: The retailer is unlikely to make money on such a cut-rate offer.

Walmart, however, needs to make up for lost time online, said Burt P. Flickinger III, managing director of the Strategic Resource Group, a New York-based retail consulting firm. “Walmart.com has been severely mismanaged,” Mr. Flickinger said. “Walmart would go a few years and invest strategically and significantly in e-commerce, then other years it wouldn’t,” he said.

“Meanwhile, Amazon is making moves in e-commerce that’s put Walmart so far behind that it might not be able to catch up for 10 more years, if ever.”

Looking up at the leader is an unfamiliar perch for Walmart, which for decades had dominated retailing with a vast supplier network, stripped-down supercenters and rock-bottom prices.

Before Amazon, Walmart was the retailer that undercut everyone else with impossible-to-beat prices and hefty scale, muscling them out of business.”

It’s understandable to me that most of Walmart ‘s customers are conditioned to shop in the store.  Changing that behavior is difficult to say the least. So WCWMD? – What could Walmart do?

Well one thing that could be tested is to analyze customer transactions (with permission of course) that could assist shoppers in better understanding their own personal behavior as Walmart customers.

Take dry goods for instance. Purchases of paper towels, napkins, toilet paper, all could be segmented and then buying behavior over a period of time – three months minimum but better yet six months or even a year. The resulting data would then allow Walmart to offer to deliver the goods on a timed schedule. This would be done on the Walmart.com website.

But the offer could be made via and email, on a store receipt, even a direct mail piece that points out the many ways auto-shipping could save Walmart customers time, money, and needless effort. Less time at the store, less money for gas and transportation to and from the store and less hassle for things that one does not need to see before buying.

The message from Walmart to its customers is – yes we want you in our stores, but we want to make your life easier! Moving in-store shoppers to purchase more online is a long-tail strategic initiative. Walmart cannot afford to wait any longer s the stakes are high with the shift to online purchasing well underway.

Do you think this can be done by Walmart without them appearing to be creepy?