Posted on November 4, 2013 by markkolier 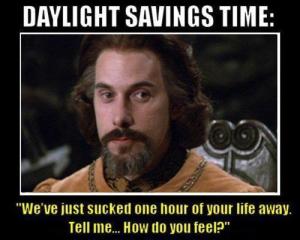 This year, I’ve heard more grousing and complaining about Daylight Savings Time, that the whole thing is just stupid, archaic, and should be discontinued.  I doth think people protest too much.   But if it did happen we’d have many new things about which to complain.   If you really wanted to complain about time you’d do well to move to China where for its own 3000 mile wide country (much like the U.S.), there is with one exception, a single time zone.   The exception is in the far west of China in Urumqi, proclaimed Ürümqi Time (UTC+6), two hours behind Beijing.   Were it not for this sunrise in Urumqi could be as early as 3:00AM in summer.

Many people believe that Daylight Savings Time was conjured up to help farmers be more productive.  While farmers may have benefitted, that in fact was not the reason.

I found a very interesting entry on Wikipedia:

“Daylight saving time was established by the Standard Time Act of 1918. The Act was intended to save electricity for seven months of the year, during World War I.[3] DST was repealed in 1919 over a Presidential veto,[4] but standard time in time zones remained in law, with the Interstate Commerce Commission (ICC) having the authority over time zone boundaries. Daylight time became a local matter.

During World War II, Congress enacted the War Time Act (56 Stat. 9) on January 20, 1942. Year-round DST was reinstated in the United States on February 9, 1942, again as a wartime measure to conserve energy resources.[5] This remained in effect until after the end of the war. The Amendment to the War Time Act (59 Stat. 537), enacted September 25, 1945, ended DST as of September 30, 1945. During this period, the official designation War Time was used for year-round DST. For example, Eastern War Time (EWT) would be the equivalent of Eastern Daylight Time during this period.”

Where you live in a particular time zone is also of significance.  Your latitude is important (Maine has longer summer days than does Florida), and the further west you live in a time the later the sunrise (and sunset)    For those of us in the eastern end of a time zone (like the U.S. East coast cities), without Daylight Savings Time sunrise in Boston at the summer solstice would be 4:07 a.m..   I can already imagine my early rising friends thinking about that 4:30AM tee-off time before work.  That the sun would set in Boston at 7:25 on the longest day would be less intriguing and as far as I am concerned, decidedly less useful.

Now that all Americans are on Standard Time (those wacky and innately rebellious Arizonans stand alone as the only U.S. State to deny Daylight Savings Time), we all face that first Monday evening where the sun will set seemingly in the late afternoon.   It’s depressing and portends what we all know is coming – the shortest days, the coldest nights that constitute winter.

However with even more anticipation I so look forward to that first Sunday night in April when the clocks move ahead and sunset goes from 6PM to 7PM and summer is in the offing.

I’d surely miss Daylight Savings Time if it were discontinued.  How about you?