Solar Highways – could they be an answer to the energy question? 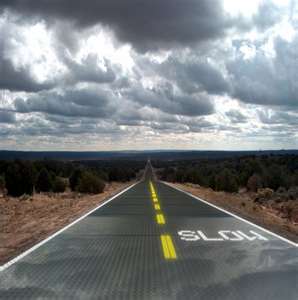 Because our company is actively working with green technology companies in China we all have a heightened sense of awareness in this area. One of our team members sent me a great link – about a 4+ minute video – http://www.wimp.com/solarhighways from a site called wimp.com (no joke!) on how LED based solar panels as road surfaces is a possible way to alleviate the U.S. reliance on petroleum based products.

The idea is that the road not only would pay for itself but that solar highways can generate energy to be used for other purposes. Scott Brusaw the inventor and co-founder of Solar Roadways, is both interesting and approachable – watch the video and see if you agree. The entire road would become an electric grid. People would be driving on glass. It is a concept that blew my mind.

I personally had no idea that there is a great deal of petroleum used in making asphalt. Actually I had not given much thought as to what’s in asphalt at all. With so much talk about the U.S. losing ground I am consistently buoyed with stories like these from what I consider to be brilliant American thinkers that are willing to throw out conventional thinking. The U.S. continues to be a world leader in innovative thinking and development of innovative products.

I took a tour through the http://www.wimp.com website and was surprised to find that most of the content is far from being as interesting as the Solar Highway video. Although for some reason I was compelled to watch the ‘Cat vs. Annoying Bird’ video. There are some other interesting videos on the site worth watching.

Separately, LED lights are increasingly becoming a topic of conversation as in January 2012 incandescent 100 watt light bulbs will no longer be sold in the United States. Incandescent bulb technology (if it can be called that) is more than 100 years old. An excellent article in USA Today by Peter Stevenson http://usat.ly/kUWxWh highlights the attributes and challenges of adoption of LED lighting for bulbs in particular.

Solar Highways may be a far off idea but LED light technology offers great opportunities to help lower energy costs and expenses.

Great ideas and innovations excite me and get me thinking. Do they do the same things for you?

1 Response to Solar Highways – could they be an answer to the energy question?