Are you tuned into your surroundings and paying attention? 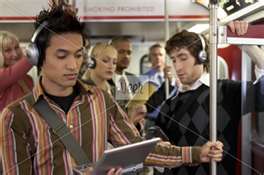 Now that I’ve been traveling to and from New York to my home in Connecticut for over 6 months (I don’t do this every day so am far from battle scarred), I have developed a groove and routine to my 1 hour and 45 minutes (on good days) commute. One thing I do not do is listen to music with earphones while traveling by train or walking in the streets of Manhattan. To paraphrase sometime pundit Yogi Berra – ‘You can observe a lot by watching’. I think the same can be said for listening – ‘You can hear a lot by listening’.

I’ve never understood why someone walking down the street in New York would consistently wear earphones and tune out of the sounds of the city. There’s a lot to listen to and I believe that your powers of observation are greatly enhanced by adding sound to the mix. I’m not averse to wearing earphones on the subway – there’s neither much to look at nor much to hear other than the rattle of the trains careening up and down the tracks.

Even riding the train – the sounds, conversations and routines being displayed can offer information and intelligence on how people live and what they think and talk about. Maybe you might strike up a conversation with your seatmate – yet if you are wearing headphones you are saying – don’t talk to me’. I get that sometimes this is exactly what people want. There are also times that loud guy on his mobile phone in the seat behind you is oblivious, annoying and plain rude. So I can see tuning him out particularly if you are trying to catch up on some sleep. What I am asking is – does it have to be every time?

The idea of always tuning out and not paying attention to one’s surroundings makes little sense to me. It’s incongruous to me for people to live in a city of 8 million people (or however many people for that matter) and attempt to create an environment of what they consider to be peace and solitude. And in many ways it can be dangerous to your health. When you cross the street while tuning out you are risking your life (and those that drive with ear buds on make me crazy!).

Spring has sprung here in New York and in Soho where our office is. This week’s weather has been amazingly good and to walk the streets to and from wherever I need to go is a never ending pleasure. I often think about what I would be missing if I simply tuned out.

How about you – do you tune out more often than not? If so why? If not why not?