Lindsey Vonn gets more than her 15 minutes 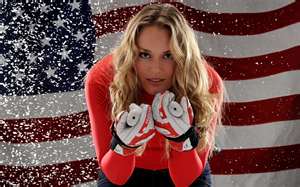 I’ve been posting regularly on my blog for over two years now and by far the most visited (and I hope read) post is the one I did earlier this year on American skier Lindsey Vonn. In that post from February 2010 http://bit.ly/h42aCA I included a couple of photos from the Sports Illustrated shoot Ms. Vonn took part in. One was of Vonn skiing, the other was of Vonn in a bikini.

The amount of traffic generated from this post is stunning to me. Are people really that curious about Lindsey Vonn? She is a terrific skier and had an excellent if not slightly disappointing Olympics in terms of winning gold medals in every event she in which she competed. A high standard to say the least.

Yet ten months later (skiing season in full swing) people are still reading that post from February. I’d like to believe it’s due to my being a writer of compelling content but I suspect it’s the bikini shot that might be driving the traffic. (Or stopping traffic?).

Ms. Vonn won another big race yesterday and she is at the top of sports news wires quite often. Just for a laugh I searched photos of Lindsey Vonn http://bit.ly/hHzaim – it seems to me as seriously as Ms. Vonn should be taken as a professional athlete she also understands that her popularity is ‘enhanced’ by provocative photos of her all over the internet. Should she be faulted for that?

I’m impressed by Ms. Vonn’s ability to stay in the forefront of the public eye. Winning races and competing at the highest level is her true contribution. After all if she weren’t winning she’d just be another Anna Kournikova.

Is Lindsey selling out by capitalizing on the fact that she is an attractive female athlete at the peak of her physical abilities (double entendre completely intended!)?

Am I selling out because I am writing about it again to see if my blog traffic increases as a result of this follow up post?

1 Response to Lindsey Vonn gets more than her 15 minutes