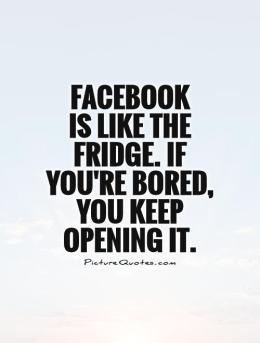 There are those that will say Facebook already was tedious.  A couple of weeks ago while guest lecturing a Fordham grad school class, I asked the students if they used Facebook more or less than five years ago and almost all heads nodded in agreement that it was definitely less. I did not explore this further with the class but based on what I hear in my own life’s network most are not nearly as active on FB as they once were.

I can think of a number of reasons how this came to be. Before I lay out a few, I want to be sure that as least as far as I am concerned, there are several really good things about Facebook. What is best about the platform is that it connects people and families inter-generationally.   My late mother-in-law did not ‘join’ FB until 2015 and she had a little help getting started from her daughter.   I don’t recall my mother-in-law ever responding to anything yet I knew she loved to look at all the photos of her children, grandchildren and great grandchildren. No other social media platform comes close to doing what FB does that way. If you have any doubts that FB is here to stay, you should reconsider when you think about what could take its place in terms of connecting families.

Then there are regular old FB ‘friends’ outside of your family members. If your FB friend roster is anything like mine it’s a rather eclectic group and most of my FB friends simply don’t post. For a platform that’s been around for nearly fifteen years (but I’ve only been aboard for about 11), the way the online world was in 2004 is very different from today. Competition for screen time has been cranked up. An article in the Motley Fool earlier this year noted that time spent on FB by the average user is approximately 27 minutes per day for “daily users” and 41 minutes per day for “monthly users”. Do you come close to that?

Also from the Motley Fool article:

‘To put Facebook’s engagement levels in perspective, it might help to compare it to Snapchat. Snap (NYSE:SNAP) boasts about how engaged its users are, with those under 25 spending over 40 minutes per day. Recently leaked data revealed that the average user spends about 35 minutes per day. Facebook tops that number by nearly 20% — and on a much larger scale.

Snapchat had just 178 million daily active users in the third quarter. Facebook had about 1.35 billion for the same period, and growing at a similar pace.

Average time spent on Facebook is comparable to Instagram, which posted last summer that its users under 25 spend 32 minutes per day in the app. Those over 25 spend just 24 minutes per day. (Instagram didn’t specify whether it was counting daily users or monthly users, but it’s likely the latter, per Facebook’s standard.)

Five reasons FB has become tedious – you may have more.

Like any social media platform (or any business for that matter) Facebook will need to evolve in order to stay relevant. The great quote attributed to Mark Zuckerberg played by Jesse Eisenberg in the movie ‘The Social Network’ – “That’s the beauty of it – it’s never finished”, is true. Longtime FB users will never go back and use the platform the way they did at the beginning. Adding new users suits FB’s goal of bringing the world a little closer together. But for now Facebook is just more and more….boring.