Civility and Humility – we should more often use our ability 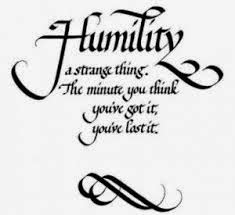 As a student of human behavior (I’m right now nearly through Robert Cialdini’s 2016 book Pre-Suasion – A Revolutionary Way to Influence and Persuade (don’t love the title but I do love the book), I too often find myself following various exchanges from friends and associates via Facebook and LinkedIn. Primarily because those platforms lend themselves to narrative exchanges. That and I am just not a big Reddit.com guy.

When it comes to people’s behavior, it’s evident that there’s a great deal of passion that comes out in the musings of those using social media as their megaphone – intentionally or not. Social media not unlike email allows the creator/writer to have an uninterrupted pulpit from which to disseminate his or her opinions to their friends, connections and followers. And since friends, connections and followers don’t always feel the same way (could you imagine?), using social media as a bully pulpit can stoke some really interesting and incendiary exchanges.

Somehow in the process the principles of civility are being increasingly left behind. Ad hominem attacks have been taking place as long as orators and writers have been around (think ancient Greeks),but they are even more public now.

What troubles me is the way ‘friends’ jump on the opinions of ‘friends’ with personal attacks when there’s major disagreement. A lack of civility is inherent – perhaps due to the less personal nature of writing something as opposed to actually saying something. Would people actually say to face of a ‘friend’ some of the things they write to others on Facebook or LinkedIn? Some might but I advance that many would not. So why the lack of civility? Is it a lack of respect? Is there a lack of understanding of any position other than one’s own? I will leave it to others to answer those questions.

That’s where humility comes in. Humility: a modest or low view of one’s own importance; humbleness. Too many ‘discussions’ (as lively as they are at times), lack both civility AND humility. There appears to be a deep-rooted need for people to prove others WRONG and show themselves as being RIGHT. Anything other than complete capitulation on the part of those that disagree is not enough. As if there are only winners and losers. Sure people might write that they ‘agree to disagree’, but my sense is that often that is an insincere sentiment. You don’t agree with me = you are an idiot.

I’m lucky to have what I consider to be a fair amount of friends. Those that know me don’t need to read what I have to offer on social media to know how I feel about the various issues of the day. Those that know me also know that I have great passion for the things in which I believe. I also know that slapping dissenters and their opinions will not make them ‘wake-up’ and realize how wrong they were and how right I am and do a complete turnaround of their opinions.

It’s called civility with what I hope is a bit of humility stirred in. And it really isn’t all that difficult if one makes an effort.