Sometimes an airline gets it right – A Southwest story 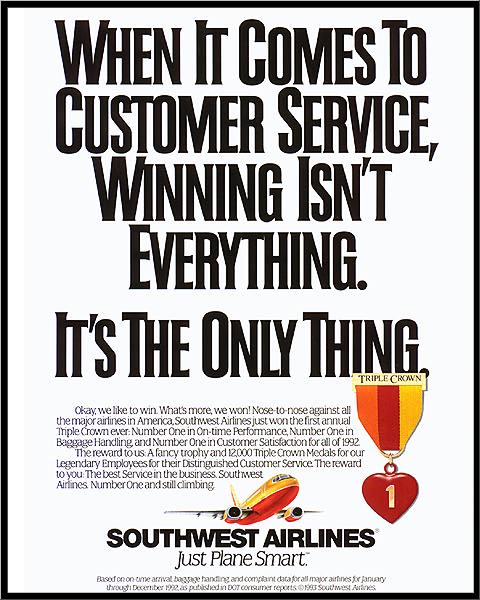 The ad above is from 1992.  For me it’s appropriate right now.  Given the recent tragedy aboard a Southwest Airlines jet my timing might have been better but since my experience happened last week it is more relevant now that it will be in the future.

If you travel enough your destiny is to have both good and bad experiences. Prior to boarding any flight hope springs eternal for an on-time, low-stress, pleasant (and as I like to say boring) experience.

Last Thursday evening I had one of the bad ones – four-hours on the tarmac due to bad weather up and down the East Coast. Having never flown on Southwest Airlines (how was this possible?) I had my first experience with lining up for boarding, tight seating, and free-Wi-fi (although I am not sure why since the Southwest website notes it is $8 on domestic flights – maybe the flight crew knew something about the trip beforehand).

It was mind-numbing to be 2nd in line for take-off only to roll back to a remote runway when Air Traffic Control (LaGuardia) placed a total stop on flights in and out of the airport. Airline personnel and passengers had no idea if or when the flight would leave. Finally the plane returned to an open gate. It took about an hour before hungry passengers walked off the plane to try to find something to eat (it was 10:30PM).

The flight crew was patient as were the passengers. Even understanding the situation, I was having a terrible overall experience through no fault of the airline. At least that’s what I kept telling myself although I really wanted to blame someone or something other than the weather.

Finally the flight departed almost four hours late and of course when we arrived in the NYC area we circled for half an hour more before finally landing. There were so many flights in the same boat that LaGuardia was midday busy at 1:30 in the morning.

I was tired and cranky and certainly while not blaming Southwest, not in any hurry to choose that airline again unless it was the best time and price option. I’ve tried cutting airlines off in the past but always end up going back since always seems to end up costing me more someplace else.

The following day I received two emails from Southwest. The initial one apologizing for my first and as it turns out, poor weather-related travel experience (Southwest seemed to know I had not flown it prior), and that a LUV coupon for a future flight discount was to be issued in a separate email – which it was only a few hours later.

I was impressed and tweeted that Southwest did NOT have to do that and their response was swift and appropriate. Period. End of story. But, I am glad Southwest did make the extra effort and what’s probably most significant is that it changed my viewpoint of the airline and how I might evaluate a future flight option to now include Southwest.

For fans of good social media practices and customer service, this is how you do it right folks.