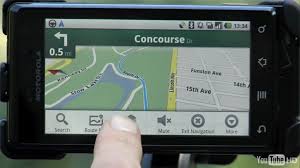 It’s summer here in the U.S. and since we Americans are still so keen on driving navigation assistance remains very important. Today most people don’t use AAA for TripTiks and maps any longer (cue nostalgic music).

Just last week Nokia’s GPS app HERE, (The Financial Times reported), was being pursued by BMW, Daimler and Audi. Audi has tried this before as has Kia but as yet Google Maps has not taken hold as the default car navigation platform.

Clearly car manufacturers and people expect more from in-car navigation services. Resultingly, stand-alone navigation devices such as a Garmin, Magellan, and Tom-Tom (remember this company?) have all been forced to change their business models.

Back in 2013 Forbes ran an article on the changing fortunes of Garmin. It has not gotten better for Garmin since then.

After having the car for one year the manufacturer offered me the opportunity (at $99 per year) to update the navigation system. It would still not have real-time traffic reports but the display is nice and convenient.

A little more nostalgia – remember MapQuest? It’s still around but I don’t hear much about that company anymore and I don’t know many people that are users. Why? Google Maps!

In fact, Google Maps is what most people I talk with are using all the time. You may be aware that Google purchased Waze – real time traffic reports by people on the road, (who are hopefully passengers or else we have hit the mother lode of using phones while driving not texting while driving but maybe even worse).

Thanks to Waze, Google Maps’ ‘time to destination’ fluctuates based on real-time traffic conditions. Alternate routes are offered when there are traffic issues. I have had my bacon saved a number of times by Google Maps – to the tune of saving me 2 hours or more on a given trip due to a horrible accident that Google Maps smoothly navigated me around.

Did I mention that Google Maps is FREE? Why would I EVER want to pay to update my in-car navigation system for an inferior piece of technology that is obsolete the moment it is delivered? Are car manufacturer’s that hard pressed for new revenue as to offer something with utility that does nothing more than degrade day by day?

Wait, please don’t answer that one – it’s too easy. I agree that in-car navigation systems should be as non-distracting as possible. Why not just allow your phone to plug into a cradle in the car that would then display the Google Maps real-time data on the car’s screen? Or is that a trick question?