A Kindle Fire is cool, an iPad is cooler – an iPadlet could be coolest 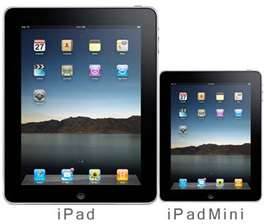 When I got my Amazon Kindle over the past holiday season I had my first opportunity to use a tablet for any length of time. I liked the smaller compact size – it fit into my briefcase better than an iPad would and is eminently more portable. Recently my wife got an iPad (2 not the new iPad) and I have had my first extended opportunity to see what all the iPad fuss is about. The Kindle Fire is useful but the iPad is cooler to use – it’s just not as conveniently portable. The Kindle is also 40% or (even less) than the price of an iPad.

When Apple announced the features of the new iPad on March 7 there were not any dramatic changes – just more speed, supposedly much better graphics quality and a few other various enhancements. By the end of last week I began to hear of the new device that Apple has in the works, a sort of mini iPad. I am going to term it the ‘iPadlet’ for now. This is because at 7-8 inches or so it is close to the size of a Kindle Fire – so more portable, and it will be priced close to the current cost of an Amazon Kindle Fire.

Could that be game over for Amazon, could the Fire be put to rest? My thought is, if Amazon is not going to offer improvements to its first generation Kindle Fire, then quite possibly. But that’s very unlikely. Jeff Bezos is one smart guy and like the late Steve Jobs knows that when it comes to the creation of a device, the journey can be its own reward. Certainly the Amazon Kindle Fire’s price would be reduced to below that of an ‘iPadlet’ (a $100 tablet computer – one for everyone!). But racing to the bottom is hardly a game-winning strategy. The Kindle Fire was a good start but it won’t be long before people are asking Mr. Bezos – ok good start but what’s next?

For now having both the Kindle Fire and an iPad is a great situation. At home having the iPad is great – handy, always ready to go and easy to use. The Kindle Fire is what I take out and around – books, newspapers, email, Facebook, LinkedIn, and Twitter are all easy to use on the go (although the inability to buy wireless service is a pain as wi-fi is sorely lacking when commuting by train to New York.

An iPadlet could be just the answer for me. How about you – are you married to the ten inch screen of the iPad or if there were a smaller and less expensive Apple tablet would you jump in and buy another?

4 Responses to A Kindle Fire is cool, an iPad is cooler – an iPadlet could be coolest